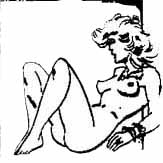 Fund-raisers will receive bumper stickers saying "I came for a cause" in
return for their efforts -- with the honor system applying to the length of
time they actually spent.

Organizers did not know for sure how many people planned to participate, but
Weide said the shop distributed more than 5,000 registration forms in San
Francisco and received many phone calls and e-mail inquiries from around the
country.

As part of its celebration, the store voiced its support for Sherri
Williams, lead plaintiff against the state of Alabama for its efforts to
prevent the sale and distribution of sex toys. Williams is the owner of two
Alabama sex toy shops.

A U.S. Federal Court judge struck down the state ban on the sale of such
products, but the state's attorney general filed an appeal last week.